Digital aerial surveyor Bluesky is giving British telcos a mile-high view of their fiber deployments and mobile 5G strategies, to empower operators to save time and money and deliver better services to customers in both rural and urban regions of Great Britain.

Bluesky offers aerial survey services, including aerial photography, Lidar and thermal data via technologies such as high-tech cameras integrated with a thermal sensor. Lidar -- or Light Detection and Ranging -- is a remote-sensing methodology (usually comprising a scanner, laser and specialized GPS receiver) used to generate "precise, three-dimensional information about the shape of the earth and its surface characteristics," according to the National Oceanic and Atmospheric Administration (NOAA).

The Heart of a Nation 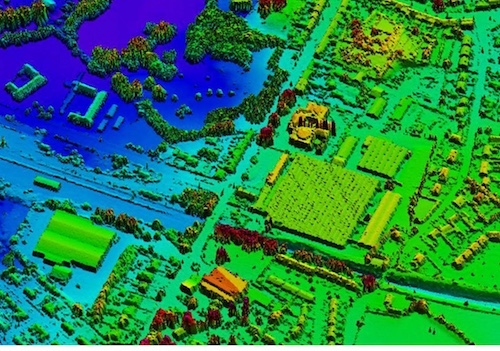 "Up until now, telcos have all been working predominantly in 2D and they haven't really been using any 3D data within their network planning or within their radio coverage planning and that type of thing. When you're doing your planning you know what's there a lot more accurately than they ever have been able to before," said Smith.

A recent partnership with spatial analytics developer Esri adds new, richer insight, she noted. While some providers are adding data scientists internally to reap the most out of these analytics, others contract outside consulting firms proficient in 3D imagery and spatial analytics, Smith said. Regardless of telcos' approach today, it's probably many will go on to create in-house positions as the data (and role) become more critical to network design, upgrades and future planning.

The alliance between Bluesky and Esri helps telcos more cost-effectively deploy broadband and wireless infrastructure, said James Harvey, manager of Partner and Alliances at Esri UK, in a statement. "By partnering with Bluesky we can help the industry make informed decisions, improving service levels and achieving cost savings," he said.

While telco customers are new and remain anonymous, early response has been strong, said Smith. British telcos use the 3D nationwide or regional data for better placement of cell towers and fiber; for example, the visuals immediately show physical structures that could obstruct wireless communications or areas where moving fiber installations a few feet would mean digging in grass instead of more difficult and expensive concrete, she said.

"That seems to be where the shift is coming: They're now looking at incorporating more 3D data so they're able to have a much better and a much clearer idea of network coverage and positioning of masts, where dead spots might be and ensuring they'll get the best possible coverage, the most cost-effective positions," Smith added. "They can even see things like if there's a tree shielding [coverage] or a building with a lift chassis on it, those things that would otherwise have been completely ignored, and take into account what impact those things might have on the signal." In addition, as these early deployments mature, telcos expect their use of mapping and computer-aided design (CAD) software to improve customer service, especially in combination with software-defined networks (SDN), SD-WAN, network functions virtualization (NFV) and APIs that allow operators to remotely manage many tasks and upgrades. Because Bluesky comes from the world of CAD and geographical information systems (GIS) for government and enterprise, its software is designed to run on multiple operating systems and hardware, Smith noted.

Ground up
Earlier this year, Bluesky wrapped up a project to develop the use of cell phones to capture 3D spatial information, supported by Innovate UK, the government's innovation agency. The assignment called for using standard smartphones to capture and calibrate video footage, then convert it to 3D data in order to collect accurate measurements of infrastructure such as overhead power lines and other utility facilities via algorithms and workflows, according to Bluesky.

In addition to government agencies, organizations with a "dispersed asset base," such as electricity operators -- and potentially telcos -- are the target market, since they could use this solution as a low-cost measurement and auditing tool, the mapping company said. Bluesky expects to launch the mobile app, as well as related data processing and hosting services, this quarter.

Recently, service providers have increasingly turned to cloud for agility and flexibility. Now, it seems, CSPs have another reason to think about cloud-based solutions -- only this time, their heads literally are in the clouds as the approach turns skyward with aerial mapping and spatial analytics for down-to-earth ROI like deployment savings and acceleration.