His initial areas of responsibility includes expanding BASE, Broadband Forum's workshop series, as well as working closely with the Forum's newly formed Connected Home Council and projects like Cloud Central Office (CloudCO), according to a release. (See Putting Cloud at the Heart of New Broadband Networks.)

"The interesting challenge and opportunity is Broadband Forum is global and cross-industry," Burke told Broadband World News. "At Calix we had our customer base and it was extensive and broad. But this takes things to a whole new level. This takes on both an atmosphere and opportunity that's broader."

Day One on the Job 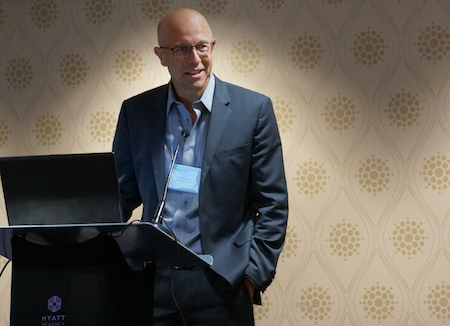 On his first official day as Broadband Forum CMO, Geoff Burke attends the organization's Q3 meeting in Montreal. (Photo credit: Tom Starr, AT&T)
During his 14 years at Calix, Burke was involved in technologies including virtualization, mesh, Internet of Things and telcos' adoption of platforms, open source and standards. As the vendor moved from a hardware-focused maker of proprietary systems to a software-based platform developer, Burke held various senior roles; most recently, he was director of corporate marketing, responsible in part for communicating Calix's transformed solutions and position to the world.

"The industry is moving at an incredibly rapid pace, with virtualization technologies, the impending commercialization of 5G and explosion of IoT technologies," said Kevin Foster, chairman of the Broadband Forum, in a statement. "In all of this, open standards play an important role in ensuring operators can take advantage of new applications and software while utilizing their current infrastructure. Geoff's role will be key in driving this strategy forward and we are very pleased to have him on-board."

In addition, Burke intends to leverage the Forum's extensive technological expertise with an eye on marketeers, he told BBWN. This will help telco marketers use standards and other Forum initiatives to advocate for their companies and aid in the development of new standards around subjects such as analytics, Burke said.

Telcos also can learn from the cable industry about sharing best practices to improve the entire segment, noted Burke. "Following up on how churn has been reduced, how new broadband opportunities have been created, allow companies to share those practices and maybe drive those into standards --in areas like analytics -- foster best practices across companies," he said.

Hiring Burke is important to the Forum as the organization grows and expands its marketing efforts, said Robin Mersch, Broadband Forum CEO. "  the Forum is entering a critical time and we are delighted to bring in someone of Geoffs caliber to help drive this work forward," he said.