ADTRAN CEO Tom Stanton Q&A: All Access All the Time

ADTRAN remains steadily focused on broadband access solutions and services, even while many competitors offer widening arrays of products, says company Chairman and CEO Tom Stanton. However, ADTRAN is expanding its reach into new territories, operators and client mix.

Stanton sat down with Broadband World News for a one-on-one interview at the company's recent ADTRAN Connect conference for journalists, analysts and providers.

The year began well for ADTRAN, especially compared with the first half of 2018, Stanton said. The upturn is due in part to ADTRAN winning business from new providers and new categories of operators -- municipalities, coops and utilities, as well as startup operators -- now designing and building infrastructure, supplying dark and lit broadband and offering gigabit broadband. ADTRAN is extended its MSO business, Stanton said, despite some continued spending slowdowns related to mergers and acquisitions. (See Cincinnati Telecom Seals Deal on Hawaii's Treasures: Fiber, Cloud, IT.)

ADTRAN often provides professional services and plays the role of trusted adviser partner for smaller and non-traditional operators, who often have smaller internal IT and infrastructure staff, and for utilities, who are well equipped and experienced in cable and fiber-laying, but lack other skills, Stanton said. And, geographically, ADTRAN's investments outside North America are paying off, especially in Europe and Australia, he noted. A longtime NBN supplier, ADTRAN also signed a deal with Australian wholesaler OptiComm, which specializes in green-field smart city infrastructure.

Last week, ADTRAN invited about 150 providers, as well as approximately 30 researchers and reporters, to its Huntsville, Ala., headquarters to share its vision, history and several product announcements. It was a time to meet corporate and operator executives, and hear from ADTRAN Chairman and CEO Tom Stanton during a "fireside chat" in the vendor's penthouse meeting space. CEO since 2005, chairman since 2007, Stanton later met with Broadband World News Editor Alison Diana for a one-on-one interview in his office.

An Open Book on Open Source 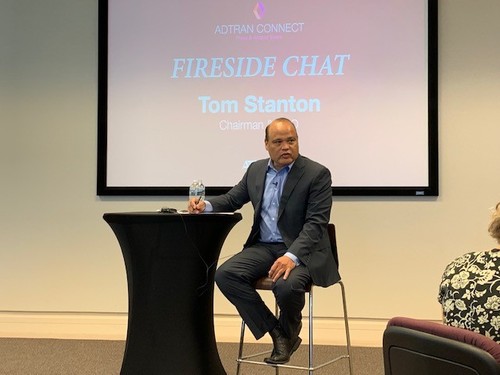 ADTRAN is a member of multiple open source, standards-focused organizations and has been a long-time advocate of the move away from proprietary, closed systems, Chairman and CEO Tom Stanton told researchers and reporters.
What follows is an edited version of that conversation, which touched on greenfield opportunities, why it's raining money on providers and -- of course -- Verizon and NG-PON2...

Broadband World News: What are municipalities, coops and utilities looking for from ADTRAN and other vendors, given that in many cases they are new to broadband?

Tom Stanton:: I think municipalities are looking for  you to be very competitive. You can't be above the norm on pricing. But I think what's [perhaps] more important to them is they can't make a mistake. If, say an AT&T launches into some product initiative and you get to the lab and then they decide, "Oh, this is a bad idea," you never hear about it. But if a municipality does that, it's all over the local press. Everybody's upset. It's a very bad thing. I think what's more important to them is having the assurance that you're going to be able to carry through on what you deliver and you're going to be able to help them in areas where they're deficient because they don't have a history of running a network. And that gets right into your services, the software tools you're able to offer them, and in the hand-holding you can do where they need it -- which is probably more important than the cost.

BBWN: And are we at a time in adoption and knowledge where utilities or muni customers recognize they need the services and they added value?

TS: If you can go in there and show expertise, show some value-add either in the services or the knowledge that you bring to it or the commitment that you're going to bring -- which is all a lot more important than maybe people realize. But if they can see you and trust you then they're probably going to want to work with you. They've got to make the numbers work, too.

BBWN: One thing BBWN has covered about ADTRAN are your diversification efforts, something you've discussed often in earnings calls and earlier on Wednesday. Which of those -- geography, customer, legacy and standards-based, for example -- is most challenging would you say? And which do you think have you have you succeeded at most so far?

TS: I think we've done a good job in both expanding geographies and the MSO space; they're both doing pretty well. I wish the MSOs were spending like they were supposed to be spending at this point! But if you look about where we are positioned within those accounts, we can't get upset about that. I think it's been very good from a geography perspective. It takes a long time. We are six years into it, right? We've made very good inroads in Europe -- finally -- that took a long time. We just didn't have name recognition. We're doing great in Australia. [First with NBN] and we now have OptiComm here. So that's good. I'm very happy with the penetration there. We still have work to do in South America, Latin America. You know, if I look at Mexico, we're good. Right? But South America

BBWN: I see you've got at least one high-level sales job posting for Latin America, right, so it looks as though you're expanding there?

TS: We're just being targeted in where we go. Mexico's always been a good potential customer for us and that continues to be, but there are areas that we really should be in and we've actually grown. It's just that the countries there and the spend on an almost country-by-country basis for many of the countries in South America is relatively small. This was one of those support [questions]. Brazil is a huge market [but] we're really not in Brazil at this point. We're in Colombia and now we're in Peru.

Telefonica has got a big presence in Latin America, of course, and we are a partner of theirs. We did some announcements at Mobile World Congress with Telefonica. The way that they operate, some of their carriers use us simply because we were approved by the home carrier. But the headquarter carrier doesn't necessarily impact the decisions in the particular country that's affiliated with that carrier. An example is maybe DT: If you get approved at DT, they also have Croatia as part of the DT business. But you have to go into the business in Croatia. The fact that DT has a relationship with you? Well, that doesn't have anything to do with Croatia. Telefonica is a little stronger than that. With Telefonica, if you get approved there in headquarters, you really have an inroad at their affiliated national operators.

BBWN: I think Orange operates more like Telefonica too.

TS: Just like that. Liberty Global is like that, too. There are some carriers where it's actually meaningful.

BBWN: Why and how are you apparently resonating with altnets, in some cases (like Zzoomm) being their only vendor?

TS: You can really name any of them: CityFibre, Zzoomm, Community Fibre. I think what makes it easier for us is, if -- and I've gotta make sure I'm accurate about this -- you're going to start from scratch, the product you would buy would be the most advanced product you could buy.

BBWN: Anecdotally, it appears there's more money pouring in on the ISP and operator-startup side of the industry: Is that accurate?

. TS: The only thing is I don't know what the history has been, but from my perspective, we're seeing people get hundreds of millions, if not billions, of dollars. One of the people we're dealing with has $2 billion worth of financing lined up and then committed to that. It's a hot market and that probably has as much or at least something to do with the macro environment, people chasing for good opportunities. That has something to do with the regulatory environment, which is right now conducive, and about fiber networks. And it has something to do with the slowness of the incumbent carriers to actually do [infrastructure deployment]. So, I think the timing is right towards actually a good investment.

BBWN: If that's true, will it prod incumbents to move a little faster again re: capex?

TS: Yes. An example is what's going on in Latin America today. We have a carrier there that has not been as active because of regulatory concerns. In the meantime, people have been overbuilding in their country. And now this incumbent finds themselves where they competitively have got to fight in order to get [share] back. You're seeing an accelerated outflow of capital into the access space in order to do that, which is good for us. And that's because of all these small carriers aggregating enough to where there's meaningful market share that [incumbents] lost. So yeah, I think it does, it does have an impact.

BBWN: In your fireside chat, you mentioned that some carriers are pulling good equipment out of their networks: Can you provide a bit more detail on the geography or size of those providers please?

TS: I have to be careful here. The only reason I have to be careful, is because I have some that are doing it now. Honestly, it's Tier 2, Tier 3 carriers. And this was the part where it's sensitive: There's talk across the board and not just in Europe, but let's say in North America. North America means Mexico, US and Canada. If you have Huawei in your network today you're dealing with one problem or another. They just can't guarantee supply.

And you saw it somewhat in their numbers. I don't know, but China effectively made up for [any sales shortfalls] by doing what they did. But at the same time, if you're on the customer side of that, it's not just a number. You're literally stuck or you have calls [from customers] that you can't answer. You have customers that are trying to sign up for services that you can't deliver and that's a real problem.

BBWN: Not necessarily related to that. But who are your main competitors, in this changed environment?

TS: Anything outside of the US it's Nokia. We always see Nokia. Inside the US you see Nokia at the Tier 1s and then you see Calix at the Tier 2s. There were some suppliers, Keymile was one you would see, and sometimes some regional suppliers. Every once a while you'll still see a small vendor, but it's usually for a very niche application on the infrastructure side. On the CPU side, of course it's still Cisco that is our biggest competitor. Their channel's so strong. Their relationships are strong. Where we run into them, they're still a tough competitor.

We just have to be good at what we do. It's very straightforward. We have to be better than Nokia in the spaces in which we compete. I have to be cheaper and I have to be in some way technologically superior. Gfast, as an example: we just bought everybody else out. 10 Gig and GPON in general, with disaggregated. Nobody can compete.