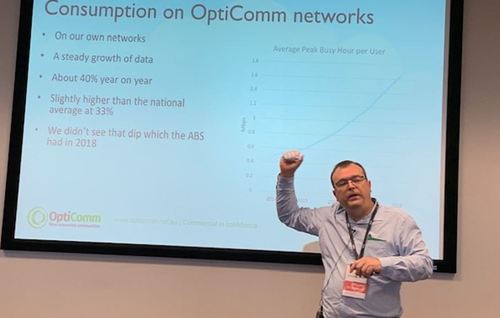 Today, OptiComm uses a 32-port GPON network to support each connected community's residential, business and government users and public spaces and services, such as public WiFi, parks and electronic-vehicle chargers, he said. The operator's infrastructure supports traditional residential, business and municipal use cases, as well as new and emerging IoT solutions and services. These data-intensive, symmetric-demanding offerings include sensor-equipped garbage pails that know when bins are getting full and compact trash; sprinklers that sense when it's rained to avoid unnecessary watering and lights kitted out with motion sensors that go on when they recognize someone is in the area, he said.

"It's all running on a single, unified network. We're going to get a long way to consuming all our GPON capacity in the next seven to ten years, but it's all these other services we're putting on the network at the same time that's driving us to move to the 10-gigabit capacity," said Davies. "GPON's been out there for the past 12 years. It has been fantastically successful for telecommunications companies like [us], figuring out what to do for affordable broadband for residential type applications. What we see is within the next five years we have to go to 10 gigabit GPON because the capacity won't be there."

Adding closed-circuit TV, virtual classrooms, hospitals and telemedicine, as well as business buildings and smart homes, with many connecting to cloud-based solutions such as Amazon Web Services, Microsoft Azure or Office 365, will only expedite operators' adoption of 10G-PON, he noted. In fact, OptiComm already is developing projects for XGS-PON technology, said Davies.

It Takes a Big Broadband Pipe to Build a City

This Hallmark Horizon style home is one of many the smart community of Yarrabilba offers as part of its planned metropolis, which one day expects to add big-box stores, higher-ed facilities and a hospital to its current list of facilities.
(Image source: Yarrabilba)
"Some of these projects we're developing, [go] for 15 years; there's no point putting it on GPON today because we know it's not going to last there. We need to plan now to build for next year's PON today," he said. "Whilst we don't need it right now, we know that in a few years bandwidth demand and capacity is going to be there on applications we know exist today -- let alone what's coming."

Communities such as Yarrabilba include multiple home models for sale and rent, as well as vacant lots for people to buy. This planned community features primary-schools, parks and other facilities, with plans to add a high school, higher-ed offerings and big-box retailers, along with other services in the future, according to LendLease, the company behind this and other smart communities in Australia.