Having launched a gigabit broadband service in 2015, GVTC Communications was operating the network equivalent of a Ferrari -- albeit one with what amounted to a rusty, beat-up Volkswagen router and WiFi system as its engine.

That, at least, is how George O'Neal, vice president of Network Operations at GVTC, described the telecom coop's infrastructure during a presentation at Calix ConneXions 2019 in Las Vegas on Monday. After all, the glossy, fiber-laden exterior was then riddled with subscribers' antiquated routers, unmanageable IoT devices and no insight into anything occurring in customers' homes, he said. This led to expensive truck rolls and frustrating -- and sometimes fruitless -- interactions with subscribers who were not getting the service they wanted (or paid for), O'Neal added.

"Often, we'd send a technician out, swap out the old router and hope for the best," he said.

That has changed. After originally considering another vendor's smart-home router and managed WiFi solution, the long-time Calix customer reviewed some of Calix' offerings. Within 45 days, GVTC had gone from signing the contract to a soft launch of Calix EXOS, GigaSpire Blast and cloud-based Subscriber Experience to some customers. It's using the solution to deliver managed WiFi and lay the foundation for additional residential smart-home solutions like security while gathering insight into subscribers' networks to dramatically reduce truck rolls, upsell services and enhance the customer experience. 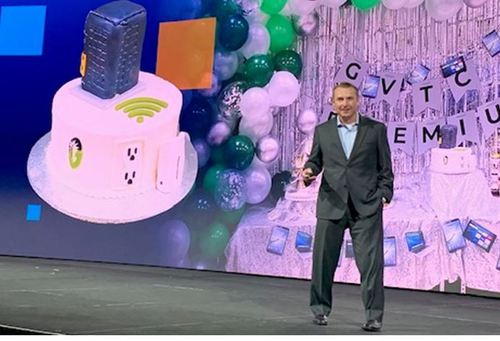 GVTC celebrated with a cake built to accurately depict a GigaSpire Blast, said George O'Neal.
Although GVTC currently uses GigaSpire Blast for home subscribers, it plans to use the solution -- dubbed GVTC Premium WiFi powered by WiFi 6 -- to extend its reach into more small and midsize businesses -- an important market since GVTC operates outside San Antonio, home to two of the nation's highest growth counties, O'Neal said.

"It has this ability to solve problems, sometimes before they even know it. It equips our technicians with capabilities they've never had before, for example, seeing interference we didn't know even existed. Now, most times we don't need to send a technician," O'Neal said. "Of course, you've got remote speed testing, CAF testing and of course the customer app, where our customers can control their own SSID and password, instead of us assigning them some ridiculously long thing that no one can remember."

Mandatory management
Using GigaSpire Blast and System First for GVTC Premium WiFi is so critical to the CSP that all subscribers must have the service, O'Neal told Broadband World News. The savings and customer insights are exponential, he said, without disclosing costs. That meant changes to GVTC's business model, including how it sells managed WiFi and its dealings with customer routers.

"We believe this system -- GigaSpire paired with Support Cloud -- will equip us with the ability to win in the marketplace. Secondly, we can't just put this great system out there with all these capabilities, then allow the customer to just unplug it, throw it in the closet and put their own stuff in as soon as our technician leaves, so we took a very bold step and created what we call our 'System First.' It's a series of network changes so once a customer is provisioned to GigaSpire, that is the only device that can get an IP address," O'Neal said.

Not a Line Item 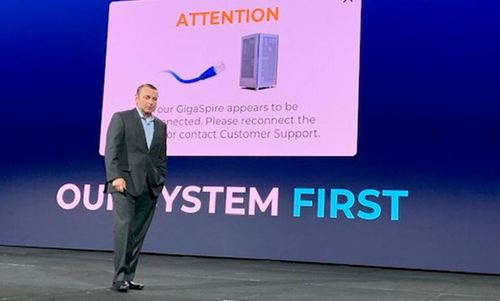 Managed WiFi is all part of the Premium WiFi service -- and so is the router -- at GVTC, said O'Neal.
If subscribers unplug GigaSpire Blast and replace it with another router, an error message appears and they're asked to put GVTC's gear back in place or call customer service. Managed services also are mandatory and are part of the Internet pricing.

"We feel like when we have such a powerful tool, it's powerful for the customer and powerful to the company that it's no longer optional to buy managed WiFi. When you buy GVTC it comes with our Premium WiFi included," O'Neal said. "This comes hand in hand with our System First as well as to fight doggedly to own the antenna in the home."