LAS VEGAS -- Verizon continues to construct the Intelligent Edge Network by testing NG-PON2's capabilities in the lab and field, and slowly increasing the company's reliance on software instead of purpose-built, legacy networks, execs said here at an industry event hosted by Calix.

"We do not have a lot of service turned up on them yet. We're still in a beta phase right now," he said. "What's in the field is only a single wavelength. What's in the field is working. What we do have is working just fine ... We are living the pay-as-you-grow sort of deployment model. The traffic seems to be just fine. We are able to do the maintenance and what we need to do, and customers are happy with the service."

Recently, Verizon and Calix hit 34 Gbit/s over fiber using a bonded NG-PON2 optical network terminal prototype on Verizon's network in the lab. To do this, the two companies bonded all four wavelength channels using AXOS software, which delivered speeds that were faster than each individual wavelength could provide.

"We created a true 40-gig symmetrical pipe over the NG-PON2 platform," said Smith. "This was very exciting work by the teams across Calix, Verizon and the optical vendors. This provides an opportunity for all these key services we've got the ability now to scale to at least a 34-gig payload."

And while it was a lab test, the results are encouraging, Sherrill said.

"In the lab we have shown the ability to move customers from one wavelength to the other. We see no reason it won't work in the field," he said. "All that's in the field is a single-channel system. We're very happy with where it's going right now."

Next, Verizon wants faster switching optics, Sherrill said. It wants Class 2 rather than Class 3, he said. "We do get 25 millisecond switch capability now from one to the next. That's fairly easy to do on adjacent channels but we've got optics that'll do that across all four channels," Sherrill added. "The switching is very fast, so you've got 25 milliseconds plus another 25 milliseonds for whatever would need to be done in the system so you're under that 50 millisecond barrier so you don't have to call an event to your customer."

NG-PON2 is central to this transformation because it's symmetric, tunable and wavelengths are assignable. Yet industry-wide adoption has been slower than some initially predicted because the price of tunable optics has remained higher than many had hoped, primarily due to Chinese operators' decision to deploy 10-Gig PON. (See NG-PON2 Success Depends on Dropping Price of Tunable Optics: Ovum.)

That situation may change sooner than some expected. UK altnet CityFibre's plans to roll out NG-PON2 will increase volume of the technology. And Calix's everyPON strategy also could encourage more providers to deploy the standard since they can do so and use their existing Calix AXOS investments, according to the vendor.

"We see NG-PON2 as the common access platform of the future. You have four 10-gig wavelengths right out of the gate," Smith said. "This is a big, big piece of this and offers a great big opportunity. You [can] bond these wavelengths together to create bigger pipes. As you begin to fill these wavelengths, you can add wavelengths and move customers."

Smith added: "NG-PON2 as a platform nicely coexists with the infrastructure we've built on EPON and GPON  over the last 13, 14 years -- all that feeder, distribution, fiber distribution hub and splitters, all that. It leverages all the investment we've already made in this space."

OneFiber, one update
Upload and download speeds will be increasingly critical with the growing use of bandwidth-hungry applications like virtual and augmented reality, autonomous vehicles, telemedicine and multi-access edge compute. Low latency, reliability and future scalability also are major considerations for providers -- and all lead to fiber, Smith said.

One Initiative Calls for Lots of Fiber 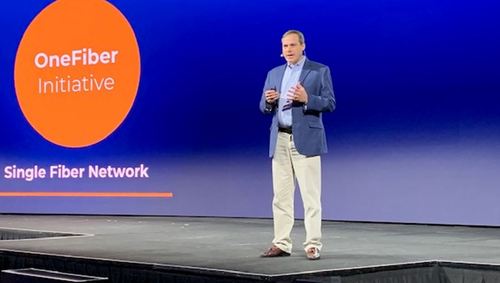 Verizon's Kevin Smith updates the Calix ConneXions 2019 crowd on the provider's OneFiber initiative, which centralized purchases and management and allows Verizon to leverage business decisions based on (and leveraging) its massive fiber footprint.
Having leased fiber outside its footprint in the past, Verizon now reaps "the owner's economics of its fiber infrastructure," the Verizon exec added. Centralized fiber purchasing gives Verizon a coordinated approach to its fiber purchasing, one based on the company's overall business plan, Smith noted.

Verizon continues to act on the three-year deals it made with fiber-makers Corning and Prysmian in 2017, totaling about $1.4 billion and covering approximately 40 million miles. The providers built a "massive fiber-deployment team" that turns out "well north of 1,400 route miles every single month in over 60 key markets in the country," Smith said. The glass is used for densification, 5G deployment, enterprise, wholesale, SMB and "potentially residential" service, he added, and has been "sized and positioned to care for all of these opportunities."

Fiber is crucial to the future of all communications service providers, Smith said.

"We see latency as one of the key currencies of future services especially enterprises," Smith added. "Reliability is paramount in the future. It is nothing that will ever be relaxed. It will only have to get better. Five-nines reliability is a must."