Service providers' road to fiber deployment may have gotten a little faster this week, thanks to two unrelated developments in the public and private sector.

On July 12, OEM Clearfield announced general availability of a common fiber distribution panel designed for use in every fiber deployment. That same day, the Federal Communications Commission unveiled its tentative agenda for the August Open Commission Meeting on Aug. 2, which includes a focus on one-touch make-ready (OTMR) for most pole attachments in its wireline infrastructure section.

With each minute providers save, they reduce the costs of rolling out fiber. While each installation differs due to the number of variables, "the national estimated goal per-site cost of large networks serving community anchors such as schools, libraries and government facilities" is approximately $57,000, according to Costfreak.com, based on updated figures from a 2009 report by Communications Engineering & Analysis for the Public Interest prepared for the National Association of Telecommunications Officers and Advisors and the Schools, Health and Libraries Coalition.

This is the bare minimum price tag for a transport-only network that would connect to existing backbone broadband infrastructure, the report said. Increasing network intelligence would add at least another $35,000 to $60,000 in 2017 dollars. One thing has not changed, however: Labor is still the most expensive element of fiber deployment, representing up to 80% of costs.

Panel of attack
Clearfield responded to operators' request for equipment to cut time from deployment, said Kevin Morgan, chief marketing officer at the OEM, in an interview with Broadband World News Editor Alison Diana. The vendor responded with the FieldSmart FxMP Panel, a high-density fiber distribution panel that operators can install in a data-style rack or cabinet in a 19-inch or 23-inch frame. When combined with the Clearview Cassette, the panels deliver an inter-connect or cross-connect environment for up to 288 ports within a design that's compliant for Inside Plant environments.

Hungry for All Fiber 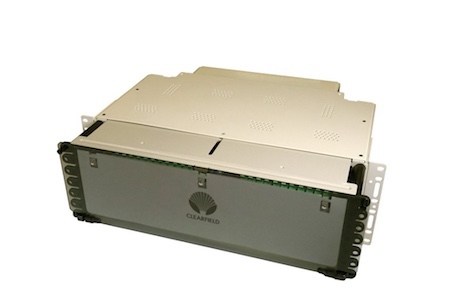 Clearfield's FieldSmart FxMP is a universal mount multi-purpose fiber panel for broadband operators.
"We're hitting a spot in the market that's enabling a lot of efficiencies where operators are challenged: putting fiber in multiple environments," said Morgan. "We're trying to figure out ways to make it more economical, more efficient, so you have the least impact to operations. We've had nearly 15 years of fiber-to-the-home. Now it's fiber to everywhere."

All this additional fiber demands more space, more cabinets, he said. When operators install and mount panels in a relay rack or frame, the amount of fiber being installed in a physical space starts to impact performance, said Morgan. Enabling all fibers to be housed in one panel eliminates the need to use multiple panels, reducing the number in a central office, data center or other location, he added.

To the poles
The FCC's commitment to discussing OTMR for most pole attachments came as welcome news to a number of industry organizations and operators that had lobbied the FCC and FCC Chairman Ajit Pai.

"One-Touch Make-Ready is critical to spanning the digital divide and connecting Americans to new networks of the future," wrote industry organization Incompas in a statement. "We appreciate the hard work of the Broadband Deployment Advisory Committee in recommending OTMR to the FCC for adoption. We would not be at this stage today without their efforts."

Added Lisa Youngers, executive director at Fiber Broadband Association: "The FCC's proposed order, if adopted, would significantly lower barriers to pole attachments and thereby expedite fiber deployments. This is a very beneficial action, and I want to credit all the FBA members and staff that were involved in helping make this happen. I also want to thank Chairman Pai and the FCC staff for dedicating so much time to address the concerns FBA and others raised. The proposed order is a major 'win' for fiber investment and broadband deployment across the country."