DOCSIS 4.0 represents the next phase of innovation for the hybrid fiber/coax (HFC) network, promising to deliver symmetrical multi-gigabit speeds along with low latencies and enhanced layers of security.

And as we've found out through the course of 2021, it's a work in progress. Initial D4.0 products are not expected to surface until sometime in 2022 and deployments will follow in the years after that.

But that lengthy timeline shouldn't be a big issue, as it's clear that much of the cable industry is not in a hurry to get D4.0-based services launched right away. Instead, they continue to think about seeding the network with some of the technological prerequisites, including new amplifiers that will expand capacity to 1.8GHz and a shift to a distributed access architecture (DAA).

Moreover, the path to DOCSIS 4.0 is not as straightforward as it was for its predecessors. A multi-flavored spec that supports both Full Duplex DOCSIS (FDX) and Extended Spectrum DOCSIS (ESD)/Frequency Division Duplex (FDD) has bifurcated that path to a degree and, for a time, injected uncertainty into the market.

But, if anything, 2021 did tell us that DOCSIS 4.0 will happen. It's just not clear how big that market will be as evidence mounts that not all cable operators are committed to making the jump. Some are upgrading existing HFC networks to fiber-to-the-premises (FTTP), while others intend to squeeze as much as they can out of DOCSIS 3.1 before deciding on their next big network upgrade. And pretty much all greenfield builds are FTTP, as the costs of upgrading existing HFC networks to D4.0 and building new all-fiber plant reach parity.

So, to reiterate, DOCSIS 4.0 will get developed and get deployed. But the tea leaves tell us that the size of the D4.0 market will not be anywhere near the size of the DOCSIS 3.1 market, at least from a network deployment perspective.

Nevertheless, much progress was made in 2021, even if much of it was skewed toward the second half of the year. Here's a snapshot of some DOCSIS 4.0 highlights for 2021:

With the DOCSIS 4.0 specs released by CableLabs in early 2020, all was relatively quiet on the D4.0 front during the first part of 2021. That started to change in April, when Comcast announced that lab trials of FDX powered by a systems-on-chip from Broadcom pumped out symmetrical speeds of more than 4 Gbit/s.

The tests brought "FDX to life in a big way," Elad Nafshi, Comcast's SVP of next-generation access networks, said, billing the trials as a "meaningful milestone" for both FDX and DOCSIS 4.0. "The concepts here are laying out the foundation of the technology delivery."

In another sign that the future of the cable network will not be a straight line to DOCSIS 4.0, Vodafone Germany CTO Gerhard Mack said the next step forward will involve a mix of FTTP and HFC upgrades to DOCSIS 4.0. "We'll see a mix of both," he said at a virtual event hosted by Light Reading in June. At that time, he expected Vodafone Germany to conduct some early field trials of D4.0 later in 2021 and into 2022, but did lament that the need to change out a large part of the passive plant, such as taps and splitters, would be "cumbersome." 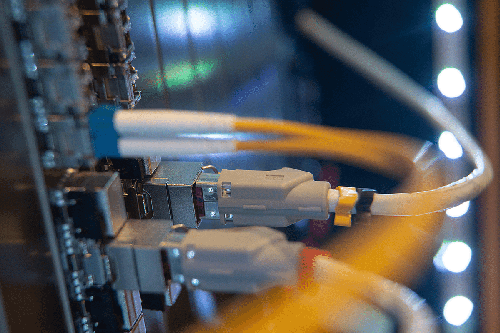 Although it was clear that Broadcom and MaxLinear had D4.0 on their respective roadmaps, it was also clear that the rules of the game had changed as the industry prepared to move beyond DOCSIS 3.1. Rather than spending millions of dollars developing products and then hoping that operators would buy them, chipmakers sought higher levels of commitments from operators and suppliers. Among them, Broadcom, sources said, pursued joint development agreements with operators, along with locked-in commitments to high-volume purchases. MaxLinear, meanwhile, took a subtler approach, saying it was seeking more collaboration with operators on the direction they would take, along with a level of assurance that they would end up buying what MaxLinear would build.

August 2021: CableLabs prepares to take DOCSIS 4.0 to the test

CableLabs and its Kyrio subsidiary said they were preparing to conduct an initial wave of interoperability tests with vendors in the fall of 2021, and planned to conduct several more interops in 2022.

While it still wasn't clear who would be ready for those tests early on, feedback from the industry determined that it was the right time to move forward. "Operators are now formulating their plans for DOCSIS 4.0 and what that includes what they're going to do with their network," Doug Jones, principal architect at CableLabs, said.

DOCSIS 4.0 was a prime topic at SCTE Cable-Tec Expo 2021 in October. At the virtual show, Comcast's Rob Howald said that the operator was making "good progress" with the technology, particularly on the integration front, and the deployment of DAA.

That same week, Comcast announced it had forged a "network to modem" connection of DOCSIS 4.0 technology in a live lab trial.

Comcast wasn't alone in touting progress for D4.0 at the SCTE show. Cox Communications' Jeff Finkelstein declared that the puzzle pieces of DOCSIS 4.0 for both FDX and ESD/FDD were falling into place. He also said that operators were seeing better than expected results for DOCSIS 4.0-capable passives in labs ahead of anticipated field trials. On top of that, operators were starting to formulate requests for information (RFIs) and requests for proposal (RFPs) pertaining to D4.0, he noted.

Meanwhile, Rich Prodan, an engineering fellow at Comcast, offered an update on the planned FDX Amplifier. That product will build in the echo cancellation technology required for FDX and enable Comcast to deploy Full Duplex DOCSIS to a larger portion of its HFC network, not just areas with "node+0" architectures that push fiber deeper into the network and eliminate all the amps between the home and the node.

Comcast expects to have samples of an FDX Amplifier in hand by the second half of 2022, with deployments starting sometime in 2023.

Clearing up some of the uncertainty faced by cable vendors interested in pursuing D4.0, CommScope's Ric Johnsen told Light Reading that the company is working with a pair of companies (MaxLinear and Xilinx are in that group, according to multiple industry sources) on the development of silicon and an underlying network architecture for DOCSIS 4.0. That initiative aims to broaden the tech options in the budding D4.0 market and give operators and suppliers an all-important alternative to a Broadcom-based platform.

Both Rogers Communications and Cable One announced next-gen network initiatives that include the eventual adoption of DOCSIS 4.0.

Although DOCSIS 4.0 comes in two flavors, the industry does see the need to find common ground on the communications protocols used in a new wave of "smart" amplifiers. To address that need, SCTE announced it had started work on a new amplifier standard that will come to life as operators start to swap in the new amps that will play a big role in the D4.0 era.