Looking to accelerate broadband deployment across rural America, learn from its international lessons and fuel non-urban demand for its cloud services, Microsoft wants to use a combination of satellite, TV white spaces, fixed wireless and fiber to bring broadband to less populated parts of the country.

Today, about 23.4 million of the 34 million Americans without broadband live in rural regions, according to Microsoft estimates. While the Federal Communications Commission (FCC) and local government agencies, in partnership with regional and national service providers, have targeted the issue for years, lack of broadband access remains a top concern in the American countryside.

Less expensive than fiber-to-the-home and more reliable than satellite, TV white spaces rely on spectrum to deliver broadband, according to Microsoft. Operating in the 600 MHz frequency range, TV white spaces allow wireless signals to pass over hills and through buildings or other obstructions, said the vendor, which has deployed 20 TV white space projects in 17 countries, deploying broadband to about 185,000 users.

As a result, the cost to deploy broadband of at least 25 Mbp/s will be 80% less than comparable fiber-only implementations and half the cost of fixed wireless solutions, such as 4G, the paper said. There was, however, no appraisal of the comparative costs for the high-bandwidth deployments in rural regions that solutions such as video, 5G and healthcare demand. 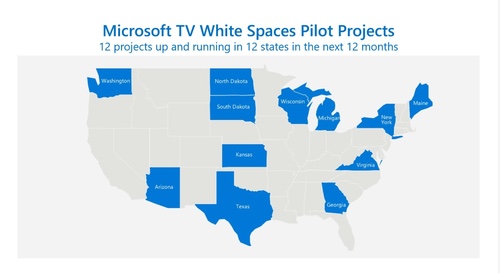 Microsoft plans to deploy broadband projects in 12 states with 12 partners in 12 months. (Source: Microsoft)
The cloud-focused vendor -- whose revenue increasingly relies on a broadband-connected world -- does not want to become a service provider. Rather, under its Rural Airband initiative, it will partner with telecom companies in order to reach its goal of providing broadband to 2 million rural customers by June 2022. That includes step one, having at least 12 projects operating in 12 states within one year, according to Microsoft.

"Our goal is not to enter the telecommunications business ourselves or even to directly profit from these projects," wrote Brad Smith, Microsoft president and chief legal officer. "We will invest in the upfront capital projects needed to expand broadband coverage, seek a revenue share from operators to recoup our investment, and then use these revenue proceeds to invest in additional projects to expand coverage further."

In addition, Microsoft plans to invest in training via Microsoft Philanthropies. The vendor partnered with the National 4-H Council to reach rural youth and is encouraging employees to volunteer via new opportunities it plans to create.

Microsoft also wants to encourage others to invest in rural broadband through technology licensing. The vendor did not, however, address whether this program is limited or meaningful solely to TV white-space alliances or whether FTTx service providers would find these technologies useful.

Other external factors will impact the success of this program, Microsoft said. The FCC must make three channels below 700 MHz available for wireless use across the nation and make TV white spaces accessible in rural regions, Smith said. Federal and state infrastructure investments, which to date have typically focused on fiber, should expand to include satellite, TV white spaces and fixed wireless, he said. And the country needs better data and data collection about the amount and condition of its broadband infrastructure, a task the FCC can work on by accelerating its annual state of broadband coverage, added Smith.